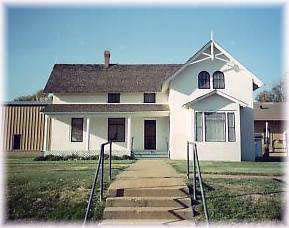 The O'Loughlin house was called, "The Little White House", as it was the largest building in the town and was the center for social gatherings, church services, meetings and housed visiting dignitaries.

The White House is the oldest two-story house in Lakin. It was built in 1875 for Alonzo Boylan, the first depot agent. John and Mary O'Loughlin's wedding reception was held there in 1882. In 1916 the house was purchased by the O'Loughlin family and moved to its present site. It was remodeled and became the home of the William O'Loughlins, a son of John and Mary.

It has been decorated in keeping with the 1916 era, and is located at the Museum Complex.