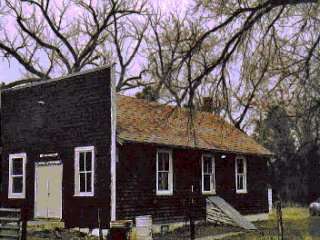 Constructed in 1926 the hall, located at the former town site of Rackett 25 miles north east of Oshkosh, is a one-story, false front commercial building. The Rackett Grange Hall #318 is significant for its association with the Patrons of Husbandry movement. This organization, also known as "the Grange," was originally conceived as a fraternal organization designed to bring farmers and their families together to socialize and to learn new farming techniques. The Rackett Grange Hall #318 was no exception. Based on historical records, it was the focal point of many social gatherings for the otherwise isolated community and surrounding area.

Both men and women were admitted to membership if they were connected with farm and were at least eighteen years of age. One of the most important results of the Grange's popularity was a decrease in the feeling of loneliness and isolation among many farm people, especially the women.

The first meeting of the Rackett Grange 318 was held at the District 12 schoolhouse on Oct. 25, 1924. It was during the third meeting that it was decided to build a new building to use for the Grange meetings. During the August 8, 1925 meeting it was decided to build a frame building and accept the one acre of land that Mr. J.E. Sherfey offered as a site upon which to build. In the January 23, 1926 meeting, it was voted to make the hall 24' by 40' in size and have a full basement.

Teams of horses, "slips" or scrapers, and shovels to make the basement, handsaws and planes and squares and hammers, and plenty of manpower and volunteer hours went into the making of the Rackett Grange hall. The building had a big coal furnace in the basement; a very nice, smooth wooden floor for dancing, meetings, and programs on the ground level; and a box-front which faced the south where the main entrance was. A side entrance led up out of the basement to the east. The basement was fitted with a kitchen area for food preparation; a "chute" through which people walked as they selected foods and, at the end, paid the cashier; and a large area with long tables and benches where people sat to eat and visit.

By July of 1926 the framework was erected, dedicated, and the hall was put to use for the 4th of July celebration. Volunteers worked furiously helping get the floor laid and ready for the big dance the evening of the 4th. The windows and doors were not installed at that time, so the children had fun crawling in and out of the windows.

The Rackett Grange met every two weeks, whereas some Granges met only once a month. There was time for socializing before and after meetings. During the 1940's the Rackett Grange quit having meetings as interest waned and membership fell. The community has preserved the hall and continue to use it as a meeting place for the Rackett Community Club (an organization formed to keep the hall in repair and serve the community). The hall is also used for other community functions as well. Volunteers gather about once a year to work at needed repairs and clean-up projects.

The Rackett Grange Hall was home for the "Saturday Night Dance" for many years. Local musicians supplied the music, and folks from all over the area made the trip to attend those dances.

Other functions held at the Grange Hall over the years include dinners, meetings, clubs, Sunday School, church, school programs, weekly Saturday rodeos in the arena built behind the hall, baseball games with neighboring communities in that rodeo arena and other community gatherings.

The Rackett Grange Hall is now on private property. The exterior of the building can be viewed from Road 193.

Address: 25 miles north east of Oshkosh on Road 193
Our Email: info@gardencone.com
Our Website:www.gardencone.com/area/rackett.htm

Things to do Historic Buildings near Oshkosh, NE