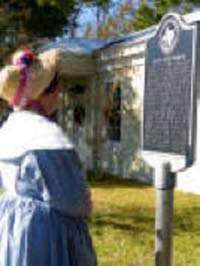 Medallions of the State Historical Survey Committee have been placed on almost 80 sites in Columbus. The newest concept in providing historical and architectural information is the unique "Talking Houses" audio driving tour program. Many of the historic sites are equipped with radio transmitters that operate on a specified AM frequency. The transmitter broadcasts a pre-recorded message that provides interesting information about the site over the car radio while you stay right in your vehicle and simply listen. This technology allows you to make the most of your time in Columbus, no matter when you are here!

In addition to homes, historic medallions also mark the location of former landmarks such as the Columbus Tap Railway, the Railway Hospital, Robson's Castle, the Columbus Female Seminary, and the Rangers of Austin's Colony.

Many of the museums and historic sites have regular operating hours and are open to the public year-round. To provide visitors with the best possible tourism experience, Columbus tourism has also developed a variety of inexpensive guided group tour packages to aid the event planner in organizing fun and interesting tours of historic sites in our community.

The tours are designed to tell the Columbus story as completely as possible and to assist the tour coordinator in staying on schedule. Each package is organized according to era, historical significance, and, when possible, geographic location.

Things to do Tours near Columbus, TX

Founded in 1907 as the Brenham Creamery Co., the name was changed to Blue Bell in 1930 after a wildflower that grows in the a...

Yorktown features many historic structures, some dating to the mid- and late-1800s. Self-guided tours are available of these ...

Ellison's Greenhouses is the only commercial wholesale greenhouse operation in the state that allows the public to tour its w...