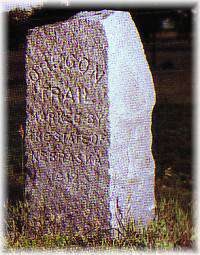 The pictures to the left show the Oregon Trail marker and the Pony Express marker located at two sites south of the Platte River bridge at Cozad.

Pictured to the right is the 100th Meridian Marker.

Things to do Monuments near Cozad, NE

A monument dedicated in 1924 to the Pawnee leader, Sky Chief stands on the Sky Chief Springs Ranch marking the last campsite ...