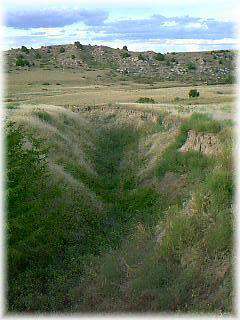 Archaeological excavations in Ash Hollow indicate that early man used the area as much as
6,000 years ago. A small rock shelter in the side of the bluff near the park visitor center was used
as a campsite by later Plains Indians for about 3,000 years. Its layer deposits of prehistory helped
scientists to establish the time sequence for the occupation of the High Plains.

The same things that drew per-historic man to the area also made it attractive to the Plains
Indians and later to the westward-bound pioneers. This picturesque area provided the nomadic
wanderers with the basic necessities of life-shelter, good water, wood, fruits, and berries.

The unusual geological strata known as the Ash Hollow Formation is a prime example of the
Pliocene history of the central Great Plains just prior to the Ice Age. All of which means visitors
can glimpse a bit of geology, paleontology, history of early man, and the story of the great pioneer
trek west at this one significant area.

Ash Hollow Creek still bisects this canyon area, although the channel was changed with the
construction of U.S. 26. Nonetheless, visitors can still see the original course of the creek and
visualize the vast encampments of white-masted prairie schooners that crowded this "oasis"
during the height of the west ward migration along the Oregon Trail.

In 1811, John Jacob Astor founded a fur trade post, Fort Astoria, at the mouth of the Columbia
River. He sent a ship around Cape Horn and another party overland to meet there. The overland
party crossed the mountains between the Lewis and Clark route and the later Oregon Trail. Both
expeditions met with much misfortune, and in 1812 Robert Stuart took some men overland to
report to Astor on their troubles.

Stuart and his six companions were the first white men to travel what was to become the Oregon
Trail. They discovered the famed South Pass, which allowed crossing the Continental Divide
without going through rough mountains. Stuart saw Ash Hollow on March 26, 1813, and named
it "Cedar Creek" since many cedars grew on its banks. The name didn't last, though .

Stuart mentioned that the canyon was heavily wooded a short distance from the mouth, but he
couldn't tell what kind of trees they were, since he didn't enter the hollow. Later travelers found
they were ash and the only such groves in the area. It was only natural to call the canyon "Ash
Hollow".

With the Indian unrest along the Missouri River in the early 1820's, the fur companies explored
the Platte River as an alternate route to the mountains. In 1824 and 1826, William Ashley used
the North Platte Valley to transport supplies to the Rockies. In 1826, he sold his interest in his fur
company to Jedediah Smith, David Jackson, and William Sublette. Ashley continued to supply
the new firm and market their furs. In 1827 Ashley's men took a small cannon from St. Louis to
the fur rendezvous at the Great Salt Lake. These were probably the first wheels to roll through
Ash Hollow and over the South Pass.

In 1830 Smith, Jackson, and Sublette took a caravan of 10 mule-drawn wagons, 81 men
mounted on mules, and two Dearborns drawn by one mule each to the Wind River Mountains
and returned in the fall loaded with furs. They reported to the government the feasibility of taking
wagons over this road. They had opened the West for the great flood of people who would
follow the trails they blazed.

Two years later Captain Bonneville and his trading expedition passed through Ash Hollow with
the first wagons to go over the Continental Divide. The first white women to enter Ash Hollow
were two missionary wives, Myra Eells and Mary Walker, who traveled West in 1838. The first
emigrant train to travel the valley was the Bidwell-Bartleson Party which passed through Ash
Hollow on June 13,1841. They entered from the east, about 1 1/2 miles south of the river...just
south of where the rock school stands today. They had followed the south side of the North
Platte River, but there was a swamp at the foot of a bluff just east of Ash Hollow, so they
detoured over the hills until they found a road into the hollow.

Early pioneers who followed the South Platte River usually crossed near O'Fallons Bluff, but the
crossing was said to be very bad. Trains found a better place to cross farther up river, just west
of what is now Brule, Nebraska. This became known as the Lower California Crossing, and
these trains entered Ash Hollow from the south, down Windlass Hill. The descent of Windlass Hill was accomplished in
several ways...some tied ropes to the back of their
wagons and used "people-power" to slow them others
used their oxen, and still others locked the wheels to
make them slide. Freighters took loaded wagons down
without serious problems. Although many emigrants
commented on the steepness of the grade, there were
few accidents there.

The road from the hill to the main campground was
quite sandy and could be heavy pulling, but people
were rewarded with a pleasant place to camp and fresh
spring water to drink. Road-weary pioneers rested
amid this idyllic setting and repaired wagons and
harness while their mules and oxen grazed the lush grasses. Today, you can still see the ruts
etched by the heavily-laden wagons as they slid down Windlass Hill. Emigrant guidebooks of the
period indicated that Ash Hollow Springs provided the best water of any stop along the Overland
Trail.

An abandoned trapper's cabin became a sort of unofficial post office, as pioneers left letters for
relatives and friends "back east" hoping an east-bound traveler would assist them on their way. There were as many as four trading posts in the canyon at different times during the 1840's and
1850's. Archaeological research has located the site of one of these posts along the trail. Here,
emigrants could trade for supplies for the remainder of their trip, and Indians could barter skins
for beads, ornaments, steel arrowheads, and other supplies. This may have been the trading post
and U.S. Mail station that was burned by the Sioux in April of 1855. Nearby is the restored
schoolhouse built in 1903 of native stone.

In 1962, The Nebraska Game and Parks
Commission began acquisition of the 1,000-plus
acres that now comprise the park. An interpretive
center was built over the entrance of Ash Hollow
Cave to protect its unique features. In 1978, the
Nebraska Game and Parks Commission opened the
visitor center on the bluff overlooking the mouth of
the canyon. A hiking trail from the visitor center
provides access to the spring in the bottom of the
canyon.

Things to do near Oshkosh, NE