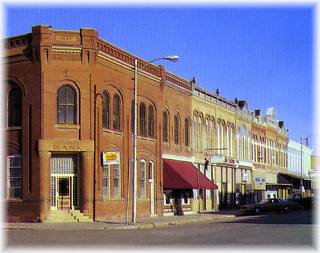 When traveling north on Highway 77 in Dodge County, you enter the "Heart of the Elkhorn Valley." On one side cattle graze on the bluffs, and on the other, an expanse of meadows and croplands stretch over the lowlands. Large grain storage facilities loom in the distance and "the hill," from which the Christmas Star is viewed, provides a place of refuge when high water threatens.

Traditionally, young people from Hooper have followed in the footsteps of their parents. Pride in their heritage is evident and many families have retained ownership of "the ole home place." Identification of Hooper's historic downtown district created interest in the preservation of its history. The Hooper Inn, formerly Wickwire Hotel, presents a nostalgic view of the times with many architectural attributes.

In 1859, a post office was established at "Jalapa" on Maple Creek. Later settlers on the other side of the Elkhorn got mail at the Logan Mill, which also served "Monnich," a settlement located northwest on "the bluffs." When the Fremont, Elkhorn & Missouri Valley Railroad came through in 1871, a station and post office were established and given the name "Hooper."

The Hooper Historic District listed on the National Register of Historic Places consists almost entirely of one and two-story brick commercial buildings located along main street. Dating from the late nineteenth century, the district is a well-preserved village of "American Renaissance"

We currently do not have any events for Hooper, Nebraska in our database. If you know of events taking place, please add the event
.

Things to do near Hooper, NE