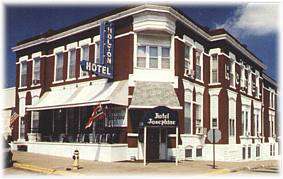 The hotel, which was named for Walker's 9 month old daughter Josephine, opened for business on Jan. 19, 1890 and has been in continuos operation since. Josephines' 1908 High School graduation picture is on display in the lobby.

At the turn of the century the hotel was widely known for its dining room, and served the community handsomely with lodging and sample display rooms for traveling salesmen. The hotel had electricity when built, but was heated with individual wood stoves in each room. Water was carried from a well in the basement by servants, as were the "chamber pots".

In 1892 the hotel was renamed The Teer House featuring a dining room of considerable fame. Other names over the years include Rinehart Hotel, Sutherland Hotel and most recently the Holton Hotel.

Today the Hotel Josephine, while retaining the charm of the past, is continuing to provide its guest with warm and caring hospitality.


Come visit us in Holton, Kansas

To Holton calendar of events

Things to do Historic Buildings near Holton, KS

The Hotel was built in 1905 and is on the National Historic Register. A bullet hole from a double bank robbery in 1910...