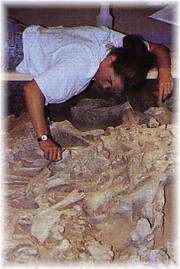 Current excavations at the Hudson-Meng Bison Kill began in 1991 in cooperation with archaeologists from Colorado State University and the University of Wyoming. These researchers proposed a different interpretation: The bonebed resulted from a natural death event, not a bison jump. If humans were not responsible for the demise of the bison at this bonebed, then what caused them to die? It's still a mystery that intrigues both visitors and scientists from around the world.

Things to do Archaeology near Harrison, NE