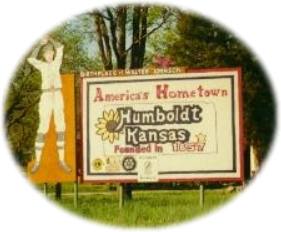 Humboldt, Kansas, is the birthplace of Walter P. Johnson, "The Big Train," baseball pioneer and one of the original five Hall of Fame inductees along with Babe Ruth and Ty Cobb. George Sweatt of the Kansas City Monarchs Baseball Hall of Fame was also a native of Humboldt. He was the first Black athlete to letter at Pittsburg State University.

In the fall of 1856, B. M. Blanton, a Methodist missionary making a trip through southern Kansas, became impressed with the level valley of lands on both the east and west banks of the Neosho River as an ideal town site. After returning to Lawrence,he told his brother, Napoleon Bonaparte Blanton and J.A. Coffey to induce German members of the New England Immigrant Society, organized in Hartford, Connecticut, to leave Lawrence and help them establish a Free State town on the site in 1857. Later, the Humboldt Town Company was organized and the town named in honor of Baron Alexander Von Humboldt, the German philosopher, geographer, and scientist. In 1861, the U.S. Land Office was moved to Humboldt from Ft. Scott, and Humboldt became more prosperous than most of the Kansas towns as visitors flooded in to register their lands. There was also a large trade with the Indian tribes to the south and west. In September of 1861, after Civil War had broken out and the men were gone to fight, the unprotected town was robbed by a band of Missouri guerillas then burned by Confederate troops in Oct.

Humboldt did rebuild and, after the war, progressed rapidly, especially with the arrival of both the M.K.& T. and the L.L.& G. Railroads.

Riverside School, located in the Museum complex, is the replica of a one room country school complete with furnishings. It also houses a large collection from Lewis howland of iron toys. There are many pictures and albums, and an abundance of genealogy sources:

This stone marker memorializes the site where a Confederate soldier was shot during the burning of Humboldt in October 1861. This is just one of 12 sites in Humboldt's Civil War Tour. Free brochures, with map, for this self-guided tour can be obtained 24 hours a day at Johnson's General Store on 9

This monument bears a marble collage of 12 Civil War sites in Humboldt depicting events during the Oct. 1861 Burning of Humboldt by Confederate troops and revealing possible hiding places of fugitive slaves found in Humboldt during the Sept. 1861

The first Museum building was built more than a century ago in 1867. There are presently five buildings of historic and collectable items open to the public. Building No. 1

We currently do not have any events for Humboldt, Kansas in our database. If you know of events taking place, please add the event
.

Things to do near Humboldt, KS

The Chetopa Museum has many artifacts detailing the history of the town, newspaper microfilms, and genealogical research. ...

Bandstand on the Courthouse Lawn