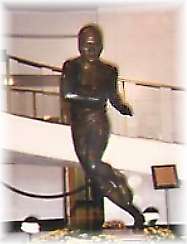 James (Jim) Francis Thorpe with the Sac and Fox name of "Bright Path", was born on May 22, 1887 on a farm just south of Prague, Oklahoma. In 1950, through an Associated Press poll of 393 sports experts, Jim Thorpe was selected as the greatest male athlete, as well as the outstanding football player of the first half of the 20th century. Jim Thorpe also played big league baseball and was the only contestant in the history of the Olympic Games to win both the pentathlon and decathlon championships.

The son of Indian parents, Jim Thorpe received his schooling on the sac and fox Indian reservation and at the Haskell Institute in Lawrence, Kansas, preparatory to entering Carlisle Pennsylvania Indian School on a part-time basis in 1904. At Carlisle he attracted the attention of the famous coach, Glenn S. ("Pop") Warner, who helped develop him into a football and track star. After an absence from Carlisle of several years, Thorpe returned to the campus, and his accomplishments in the 1911 and 1912 seasons won him selection by Walter Camp at the All-American football teams for both years. His scoring on 198 points in the 1912 season was exceeded only twice in the next 35 years.

Jim Thorpe's attainments in the 1912 Olympic Games of Stockholm, Sweden, marked the peak of this career. With relative ease he won both the pentathlon and decathlon events, placing first in four pentathlon events, and first in four and third in four of the decathlon contests. A year later, as a result of disclosures that Thorpe had played professional baseball in 1909 and 1910 with the Fayetteville and Rocky Mount teams of the Eastern Carolina League, his name and accomplishments were officially expunged from the Olympic records.

In the spring of 1913 he joined the New York Giants baseball organization as an outfielder and utility man, and for several years played major league ball with the Giants, Cincinnati, and Boston. Thorpe had meanwhile resumed his football career in 1915 by playing professionally for the Canton (Ohio) Bulldogs. In 1920 he helped organize and became the first president of the American Professional Football Association, which became the National Football League in 1922. In later years he played for the New York Football Giants, the Chicago Cardinals, and the Brooklyn Lions. He returned to the Canton team in 1929 to close out his active sports career.

He collaborated with T.F. Collison in preparing Jim Thorpe's History of the Olympics (1932) and played as an extra in motion pictures. From 1937 he was active in affairs of the Sac and Fox tribe in Oklahoma, and periodically went on lecture tours of the United States.

Thorpe was buried on April 13, 1953, at Shawnee, Oklahoma, and plans were made in early 1954 for his re-burial at a memorial center in Mauch Chunk, Pennsylvania.

In 1963, Jim Thorpe was among the original 17 to be inducted into the National Football League Hall of Fame.

Today the NFL Player of the Year Award is named after Jim Thorpe, as is the college award for the Best Defensive Back.


Come visit us in Prague, Oklahoma

Things to do Famous People near Prague, OK