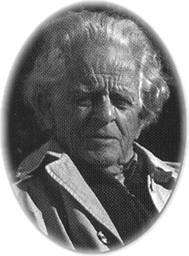 Author, lecturer, and award-winning poet, John Gneisenau Neihardt, arrived in Nebraska in 1892 at the age of eleven. Settling in Bancroft from 1900 to 1920, Neihardt became interested in the traditions, culture, and history of the American Indian. For a time, he lived among both the Oglala Sioux and the Omaha tribes. Those experiences dramatically shaped his writings, poetry, and short stories detailing the struggle between white settlers and native peoples to claim the West.

Neihardt's most famous work, Black Elk Speaks, received international critical acclaim and has been translated into many languages. Other great works include The River and I and the epic poem, A Cycle of the West. In 1921, Neihardt was appointed Poet Laureate of Nebraska.

Neihardt had been writing poetry since age 12, and upon arriving in Bancroft, worked as an owner-editor of the Bancroft Blade. He traveled the plains and lived the land first hand. He became a published author at 19 ... married at 27 ... started his major work, The Cycle of the West at 31 ... and became Nebraska's Poet Laureate at 40. At 45 he was literary editor for the St. Louis Post Dispatch, and at 68 became poet-in-residence and lecturer in English at the University of Missouri. In his 80s, Neihardt returned to Nebraska, living with friends and continuing his writing and personal appearances. He was working on the second volume of his autobiography when he died at age 92.

Come visit us in Bancroft, Nebraska

In January 1903 the Cuming County Supervisors awarded an annual bridge construction contract to the Standard Bridge Company of Omaha. In 1903 the county undertook an ambitious bridge-building program,

We currently do not have any events for Bancroft, Nebraska in our database. If you know of events taking place, please add the event
.

Things to do Famous People near Bancroft, NE

-- Joseph "Iron Eye" LaFlesche, last chief of the Omahas. One of his daughters, Susan LaFlesche Picotte, was the first wo...