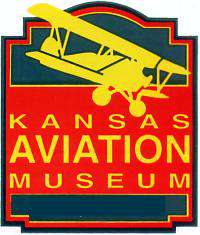 The Kansas Aviation Museum is housed in the aerodrome historical district of the original Wichita Municipal Airport, in the "Air Capital of the World," at Wichita, Kansas. This historical commercial aerodrome was used for public transportation to and from Wichita from the time of the architectural design in 1929 until it was sold to the US Air Force in 1954.

Ours is one of very few remaining Art Deco Airport Terminals in the United States, and holds special significance having been designated on Charles Lindbergh's initial air mail route. In fact, our city built the terminal to help win the bid as an air-mail stop. And AIR MAIL is credited as the Father of modern commercial aviation. On the National Register of Historic Places, this is a NATIONAL TREASURE, and a basis for an evolving world class museum.

YES! You too can walk the stairs that Charles Lindbergh walked! ...and view the massive 37 foot bas-relief sculpture honoring Lindy's solo trans-Alantic flight.

The entire museum aircraft population includes artifacts manufactured in Kansas, from vintage and more current homebuilt aircraft, to original Stearman, Boeing, Beechcraft, Learjet, Cessna, even the Swallow of Lindbergh airmail fame, and less well-known aircraft springing from the passions of Kansas' sons and daughters, and those who chose to come to Kansas for the support that Kansas offered for the aviation phenomenon.

The historic aerodrome grounds includes ramp storage for a growing number of military and civilian aircraft built in Kansas, the largest of which is a Boeing-built B-52, and the smallest, Cessna-built jet Air Force trainer, T-37B "Tweety Bird" --The Air Force's first jet trainer, and Cessna's first jet manufactured; notable as Cessna's Citation series are the most popular "bizjet" in the world today.

The Mid-America All-Indian Center preserves the heritage of the American Indian tribes of North America and is located at the confluence of the Big and Little Arkansas Rivers, on land where the Wichita tribe camped more than 100 years ago.

A distinctive local landmark, Wichita's 1892 City Hall building is home to the Wichita-Sedgwick County Historical Museum. Known as the "Palace of the Plains," the building is one of the city'