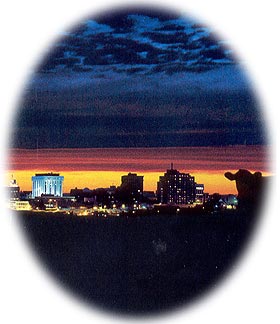 There's a place on the northeast border of Kansas where the Missouri River meets the Kansas River. A place where rivers join and cultures merge. Arts and entertainment cross paths. And, some of the most fascinating parts of America's past unite with the present, here in Kansas City, Kansas, in Wyandotte County.

One of the oldest farmhouses in Kansas still stands near the shores of the Kansas River. A rare American Indian dugout canoe now sits on dry land, a museum treasure for all to see.

The past for Kansas City, Kansas is one of rich ethnic culture. Memories of the 18th century European, African, and Central American immigrants, the stockyards, the railroads, good times for America's farmers and the traditions of the American Indians are lived out each year in Kansas City Kansas through its many festivals, its monuments and its historic sites.

The town of Wyandot was incorporated in 1858. It was located in what now is the downtown area of Kansas City, Kansas. Wyandotte County continued to grow in its early days. By 1870, it had more than 10,000 people. It was during this period that Kansas City, Kansas became a railhead and received more than 120,000 head of cattle its first year.

Industry has always been important to Kansas City. Railroads and the stockyards can trace it roots to the 1870s. In the early 1900s, several meat-packing houses were established near the banks of the Kansas River. Many immigrants from Slavic nations came here to work in the packing plants. Most of the original white settles were of English and Irish descent.

In the late 1870s and the early 1880s, many black persons came to Wyandotte County. They were called the "Exodustors" who migrated from southern states after the Civil War. The railroads brought Mexicans to Wyandotte County. In more recent years, there has been a substantial increase in Mexican immigrants along with several persons from Southeast Asia.

White Church Christian Church was established in 1832 and is known as the oldest church in the state of Kansas that is still in use. The native stone church includes 21

The Rosedale Memorial Arch pays tribute to soldiers who served our country in World War I. Listed on the National Register of Historic Places, the Arch, based on the Arc de Triomphe in Paris, was designed by Rosedale resident John LeRoy Marshall and dedicated in 1923. In 1993

The first permanent white settler in Wyandotte County was Moses Grinter. He built Grinter House in 1857 which is now a National Historical Site which overlooks the Kansas River.

Things to do near Kansas City, KS