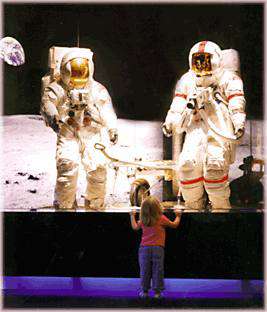 This impressive Smithsonian-affiliated facility houses one of the most comprehensive space museums in existence and offers the Carey IMAX Dome Theater; Dr. Goddard's Laboratory - a live rocket science demonstration; the Justice Planetarium Theater with both star and laser shows; and a host of educational programs.

The Cosmosphere is home to the actual Apollo 13 command module "Odyssey", an SR-71 Blackbird spy plane, a full-scale model of the Space Shuttle, German V-1 and V-2 rockets, and the world's largest collection of Soviet space artifacts in the Western world.

The Hall of Space Museum features artifacts from both the U.S. and Soviet space programs and tells the story of the Space Race like no other museum in the world can. The Apollo Gallery, a comprehensive exhibit devoted to the Apollo era and the dramatic race to the Moon, opened in 2001 and features hundreds of historical artifacts.

Things to do Museums near Hutchinson, KS

The display in Charles Hall on the Hesston College campus consists of several small exhibits on geology, the Quivira Indians,...