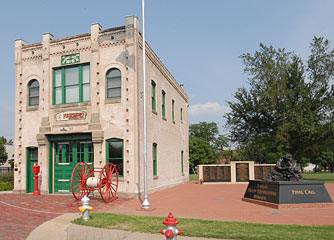 Historic Engine House No. 6 - The year is 1910. Imagine a pair of matched fire horses, Tom and Dick, in their stalls, one on each side of the apparatus floor, awaiting their next run. The Armstrong harnesses are hanging from the ceiling in readiness. (The pulleys are still there.) The four firemen on duty may be gathered around the potbellied stove at the rear of the floor or perhaps have retired to the bunk room on the second floor. Their names are W. R. Snow, Willie Spenser, Fred Davis and Charles Duffner. The red Seagraves combination chemical and hose wagon sets facing the accordian door that opens out to Old Lawrence Avenue.

But that scene is short-lived. Engine House No. 6 was the last horsedrawn station in Wichita. By 1918 the horses were gone, and Wichita had become the first all-mechanized fire department in the United States and the second in the world.

By 1953, the old classic neighborhood station was obselete and closed. It was used for storage and reserve firefighter training, but it fell into disrepair and was destined for demolition.

In 1993, concerned firefighters and neighborhood residents cooperated to restore the building and develop the first Kansas firefighters museum. This grassroots endeavor was accomplished mainly by a half dozen loyal volunteers who faithfully worked one day a week on the project for several years.

The structure was placed on the National and Kansas Registers of Historic Places in 1994.

The Kansas Fallen Firefighters Memorial is dedicated to those Kansas firefighters known to have died in the line of duty. It is located just south of the Kansas Firefighters Museum, 1300 S. Broadway, Wichita, Kansas.

The museum and memorial are situated on the northwest corner of Lincoln Park and across the street from a modern fire station.

The memorial courtyard includes:
• A statue of a firefighter discovering the helmet of a comrade amid debris
• A brick plaza of engraved bricks
• A memorial wall and meditation area
• A 50 foot tall flagpole from Engine House No. 9

Not a typical riverside residence in the least, but definitely one of the boldest homes built during the early period of Wichita's illustrious growth is the Campbell Castle. Built in 1888 by Burton Harvey Campbell, this architectural masterpiece was duplicated from architectural drawings of the "