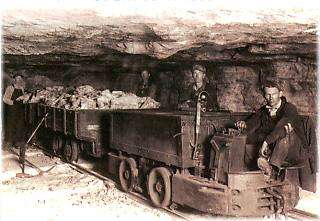 The Kansas Underground Salt Museum explores the story of salt in a subterranean environment as few have seen before. Voted as one of The 8 Wonders of Kansas it is the only museum of its kind in the Western Hemisphere. Visitors descend 650 feet below the Kansas prairie into a working salt mine to see features of an ancient salt deposit laid down 275 million years ago and mining equipment that has been used in this mine over the past 80+ years. Not to mention, learn about the scientific and geological make up of the earth in this area of Kansas.

Regularly scheduled tours are offered throughout the day with the last tour departing at 4pm daily. Reservations are strongly recommended due to limited elevator capacity. Due to safety regulations NO ONE under the age of 4 years old is permitted underground.

Hutchinson was built above one of the largest salt deposits in the world with more than 67 miles of mined out cavern, the Hutchinson Salt Company produces more than 500,000 tons of rock salt each year. Salt from the Cargill and Morton evaporation plants produce salt for use by pharmaceutical companies, baked foods distributors, agricultural and chemical businesses, and common table salt for people throughout the United States.

The only place you can see a salt mine similar to the Kansas Underground Salt Museum is by traveling to Europe and going through the salt mine attractions located in Wieliczka, Poland, Salzburg, Austria, Bex, Switzerland, and Berchtesgaden, Germany. These salt mines attract millions of visitors each year. There are just 15 salt mines in the United States; none of the others are accessible to tourists.

The Kansas Underground Salt Museum encompasses more than 100,000 square feet of awe-inspiring space. An above-ground Visitor Center will provide orientation and training for the subterranean experience and guides will be on hand to assist guests through the facility. The tour is divided into two parts - a tram driven "Dark Ride" and a self-guided gallery tour.

The Kansas Underground Salt Museum is educational and entertaining and will provide visitors with an unforgettable experience when they travel 650 feet underground into a subterranean attraction fun for people of all ages. The Museum is also one of the Eight Wonders of Kansas (http://www.kansassampler.org/8wonders/).

Things to do Museums near Hutchinson, KS