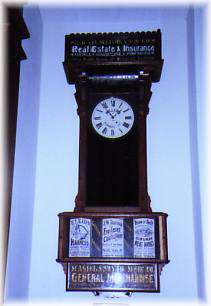 Among the really historical relics of Kingman which is seen perhaps most often, and appreciated for its historical value, is the Library Clock, over 100 years old. The old clock kept time in Peter Miller's jewelry store for many years. After the death of Mr. Miller, his daughter, Miss Minnie Miller, presented the clock to the library. The clock was in use behind the librarian's desk. The chime would strike at five-minute intervals. The chimes activated a mechanical device that rotated the advertising cards which ornament the lower section of the tall clock case.

Things to do Artifacts near Kingman, KS