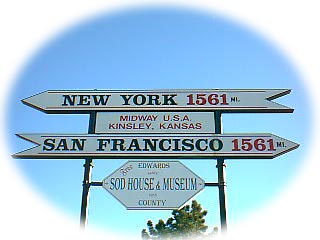 Kinsley is located Mid-Way between New York City and San Francisco. It is the county seat of Edwards County and is situated in the Arkansas River Valley in west central Kansas, a region known for agriculture and related products.

The Chicago Workingmen's Town Company founded Kinsley in 1872, naming it Petersburg for T.J. Peter, a director of the Santa Fe railroad which was then building westward. In 1873 the town was renamed in honor of E.W. Kinsley, a Boston philanthropist who donated money to the town to build a Congregational Church, Situated along the Santa Fe Trail, history abounds in the region, including the Battle of Coon Creek which occurred east of town between a detachment of soldiers and a band of Comanche and Osage Indians.

Indian attacks along the Santa Fe trail were frequent from the 1820s to the 1870s. Two miles east of Kinsley at Arkansas River bridge, where the trail followed the Arkansas River, the Battle of Coon Creek was fought June 18, 1848, between some 200 Comanches and Osages and 140 soldiers, half of whom were recruits bound for service in the Mexican war. A startling occurrence after the inconclusive battle, according to the official report, was the appearance of an Indian woman "who seemed to be their queen, mounted on a horse, decorated with silver ornaments on a scarlet dress, who rode about giving directions about the wounded." The identity of this angel of mercy has remained a mystery.

Kinsley had its "Great Train Robbery" January 27, 1878. Bandits attempting to loot the Santa Fe stations' safe and the westbound Pueblo Express were foiled by a young telegrapher named Andrew Kinkade. Four of the gang were later captured by Sheriff Bat Masterson of Dodge City.

The Palace Theater has been restored to its majestic glory. Built in 1917, it has been called "..one of the finest examples of shoebox theater design"

Welcome to Edwards County Historical Society sod house, museum, and chapel, which is located half-way between New York City and San Francisco, in the Half-way Park at the West Edge of Kinsley, Kansas.

Out of the heartland of America, a farmer decided those wooden horses made more money than farming. In 1908

The Kinsley Golf Club has one of the finest 9

To Kinsley calendar of events

Things to do near Kinsley, KS