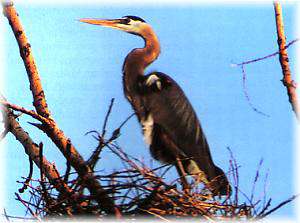 The Kirwin National Wildlife Refuge is an 11,000 acre wildlife paradise located in the rolling hills and narrow valley of the North Fork of the Solomon River in North-central Kansas. The Refuge lies in an area where the tall-grass prairies of the east meet the short-grass plains of the west. As a result of this merging of prairies and plains, grasses and wildlife common to both habitats are found on the Refuge.

Kirwin NWR, the first National Wildlife Refuge in Kansas, was established in 1954 as an overlay project on a Bureau of Reclamation irrigation and flood control reservoir. Historically, great herds of bison roamed these vast grasslands, often followed by wolves that fed on weak and sick animals. Native Americans, who depended on the bison for their subsistence, also resided in this area. Ducks and geese, now attracted to the Refuge in great numbers, were uncommon in this area until large reservoirs were built in the early 1950s for irrigation and flood control.

WILDLIFE - Kirwin NWR is home to a rich variety of wildlife species including 34 species of mammals, 31 species of reptiles and amphibians, and 197 species of birds. Beavers find food and cover in aquatic habitat, while raccoons and skunks search for a meal along the reservoir shore, and coyotes hunt the uplands.

When the reservoir is low, white-tailed deer find shelter in the windbreaks and in the brush in the dry bottom of the reservoir. Resident species of birds include upland game birds such as pheasant, bobwhite quail, greater prairie chicken, and Rio Grande turkey. Fields of native grass hide mice and rabbits, the pry of many species of hawks and owls.

WATERFOWL - Visitors to the Refuge are often awed by the impressive numbers of waterfowl, water birds, and shorebirds that pass through the Refuge during their spring and fall migration.

Spring migration is marked by the arrival of northern pintails, northern shovelers, gadwalls, and both green-winged and blue-winged teal. Shorebirds, such as sandpipers, American avocets, and marbled godwits, also can be seen in large numbers flying and feeding in synchronized motion.

Heralding the beginning of fall migration, water birds, such as American white pelicans, double-crested cormorants, and many species of gulls, begin arriving the late September. Later arrivals include Canada geese, white-fronted geese, mallards, gadwalls, northern pintails, and other dabbling and diving ducks. Some ducks and geese find the Refuge conditions to be so attractive, even in winter, that they fly no farther south. In fact, approximately 20,000 Canada geese and 10,000 mallards winter at the Refuge.

In late fall and early winter, both golden and bald eagles soar over the landscape. Small numbers of peregrine falcons are also present through this period. Northern harriers, red-tailed hawks, and American kestrels are common to the area as well. Many migratory songbirds can also be found in the diverse Refuge habitats.

Waterfowl species that nest on the Refuge include Canada geese, mallards, and wood ducks. Great blue herons and double-crested cormorants nest in a rookery, a large group of nest high in the trees, along the reservoir shoreline. A variety of small perching songbirds also nest in the Refuge grasslands and riparian areas.

Wildlife Observation
More than 300 wildlife species can be observed and photographed on the Refuge. The tour route following the south shore of the reservoir and Bow Creek provides exceptional habitat diversity for wildlife viewing.

Admission: No entrance or user fees
Address: 4 miles west and 1 mile south of Kirwin, KS or 11 miles southeast of Phillipsburg, KS on State highway 9.
Phone: 785-543-6673
Our Email: kirwin@fws.gov
Our Website:www.fws.gov/refuges/profiles/index.cfm?id=64610

The Kirwin National Wildlife Refuge is an 11,000

Fishing for walleye, black crappie, largemouth and smallmouth bass, wipers, channel catfish and other species is permitted in the reservoir year round, plus the North Fork of the Solomon River, and Bow Creek.

Kirwin NWR consists of 10,778 acres of diverse wildlife habitat including 34 species of mammals, 31 species of reptiles and amphibians, and 197 species of birds. Most noted as a waterfowl refuge, Kirwin NWR is a birder'

http://kansaswalleye.org/ You are invited to the five scheduled tournaments at some of the finest lakes in Kansas.

WHAT TO KNOW ABOUT ACCURATE FISHING REPORTS:

Things to do Wildlife Refuges near , KS