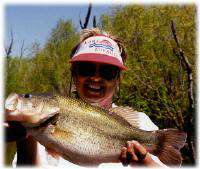 Lake Eufaula has been listed as seventh place overall as one of Oklahoma's Top 25 Bass Lakes. The average weight per bass on Lake Eufaula was 2.37 pounds with 76 percent of the anglers being successful. These results were based from more than 1000 bass fishing tournaments held during the year.

BASS - Largemouth, Smallmouth, Kentucky or Sports are waiting on you!
With the great diversity and size of the lake, there is a divergent variety of structure to fish for bass. The water clarity changes with the seasons almost providing three lakes in one. If you like to fish stumps, willows, buck bushes, rocks, creeks, river channels or sand flats, Lake Eufaula has a bass for you.

CATFISH - The catfishermen in the area use a variety of methods to catch old "Mr. Whiskers". Roads and reels, a jugline or a trotline can provide the thrill of catching quality catfish.

CRAPPIE - The June 10, 2000 regional tournament showed Lake Eufaula to be considered as a Top 10 crappie lake. In the field of 129 teams, over 40% caught a 10 fish limit with an average weight of one pound per crappie and there were several two pound crappie. For the average fisherman, springtime or spawn period seems to be the key on Lake Eufaula. Fish from the bank or out on the boat, when you get in the crappie, you can catch your limit! Crappiefest is a tagged crappie tournament that lasts for two months.
Fishing for crappie in private docks is a big part of the crappie fishing on Lake Eufaula. For crappie fishermen that want the comforts of home, some of the largest and most comfortable fishing docks in the country are located around the lake. Some public docks even have carpet on the floor and green plants which will make your visit a pleasant one! Oh yes, the catch a lot of quality crappie year round and the docks are HEATED for you wintertime comfort.

STRIPERS - Stripers are not in the lake but are abundant below Eufaula Dam! The dam is located on the South Canadian River which empties into the Arkansas River and is close to the town of Webber Falls. The state record was caught below Eufaula Dam and was not broken until just a few years ago. Some folks plan their vacation just to fish below Eufaula Dam. Stripers and sandbass love the swift moving water below the dam. Also caught in the river are the much sought after Saugeye, a Walleye/Sauger hybrid. These Saugeye are also caught frequently when trolling for sandbass it the lake itself.

Rugged, rock-strewn hills surrounding the inlets and coves of Lake Eufaula make Arrowhead a beautiful, challenging course rated the number one public course in the state in 1997 and 1998. Mature, native trees line Arrowhead'

Arrowhead State Park features 2,200 acres of rolling, tree-covered hills and rugged terrain. It is located on a peninsula of Lake Eufaula, one of the largest manmade lakes in the Southwest. The lake has 102,000 acres of water, 600

Lake Eufaula has been listed as seventh place overall as one of Oklahoma's Top 25 Bass Lakes. The average weight per bass on Lake Eufaula was 2.37 pounds with 76 percent of the anglers being successful. These results were based from more than 1000 bass fishing tournaments held during the year. <

Corps of Engineers project lands are open for public hunting except for developed park area and lands in the vicinity of the dam and other project structures. The principal game species include bobwhite quail, deer, cottontail rabbit, squirrel, duck, geese and morning dove.

Above Natural Falls State Park natural springwaters flow into a common stream, creating a cascading 77 foot waterfall. At the...

A fish habitat program has been established at Birch Lake and available species for the angler include largemouth bass, walle...