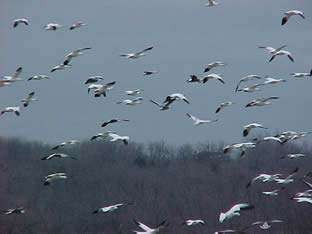 Two national wildlife refuges that have locations in both Oklahoma and Texas surround Lake Texoma. Each year thousands of canada and snow geese, various shorebirds, several species of ducks and bald eagles migrate to both the Hagerman and Tishomingo refuges, while deer, wild turkey and other native animals make their home year round on the some 30,000 acres that make up these two areas.

Two designated primitive camping areas are offered on the area, while both lodging and restaurants are available in Tishomingo. A 100 yard shooting range with shooting bench can be found on the south side of the area.
Bald Eagles winter in all areas of the WMA.

Deer: White-tailed deer are present in good numbers but are heavily sought after.

Turkey: Rio Grande wild turkeys are present in fair numbers but are heavily sought after.

Rabbit: Both cottontail and swamp rabbits are present in fair numbers.

Waterfowl: Ducks are usually present in good numbers but are heavily sought after.

Limited hunting of deer, dove, quail, squirrel, and rabbit is offered by Hagerman NWR. All state and federal regulations apply. This hunt is strictly recreational. Population control is not an objective.

Small game hunting is by shotgun only. No shell with larger than No. 4 shot size permitted. No rifles or handguns are permitted. Dogs may be used during the hunt, but must be under the control of the handler at all times.

Hunt Areas: The hunting area will be posted as "Public Hunting Area." Hunters must check in and out at the self-permitting check boxes.

Permits: Each hunter must have a permit. Permits are self-issued at check boxes located at the entrances to the hunt areas. Take a permit card, fill in the left side, tear it off and place it in the box. The right half is your permit. Fill it in on completion of your hunt and place the permit in the same box before leaving the hunt area.

Come visit us in , Texas

Things to do Hunting near , TX

Aquilla lake will now be included in Whitney's hunting program. Aquilla's 4000 acre hunt program was managed in the past by T...

Pat Mayse Lake provides excellent opportunities for fishing and hunting. These lands are managed for upland game and whitetai...

Beginning on September 1, 2005, Navarro Mills Lake hunting regulations will change. All hunters must apply to the lake office...