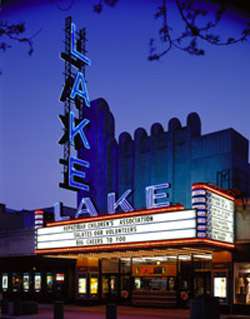 On April 11, 1936, the Lake Theatre opened with a single screen, and a seating capacity of 1,420. Designed by world-renowned architect Thomas Lamb, the Lake is a prime example of art deco style. When Classic Cinemas took over the Lake in 1981, its distinctive decorative elements had long been painted over, and water damage from a leaky roof had destroyed much of its plasterwork. Classic Cinemas was finally able to purchase the theatre in December of 1984 and immediately embarked on an ambitious renovation project.

A new roof was installed, air conditioning and heating units were put in place, and the theatre was divided into three separate auditoriums. Special attention was given to the center auditorium to ensure it retained its original look. Over 1,000 feet of plaster bands were recast from the original pieces to put on the new walls and an beautiful ceiling light arrangement was relamped. In 1985 a fourth auditorium was added, using space formerly occupied by two retail stores.

In 1988 the marquee was renovated and in 1991 additional neon was added. In June of 1995, Classic Cinemas purchased the building next door where an additional three auditoriums were added, which opened in August of 1996. In November of 2005, the Lake premiered Real D Digital 3-D projection in auditorium 7.

Today the Lake is home to many decorative elements brought in from theatres that are no longer standing. The ceiling fixtures in the new lobby rotunda are from the Will Rogers Theatre, which stood at 5635 West Belmont until 1991.

Two plaster musician busts are from the demolished Southtown Theatre at 636 West 63rd Street. Fixtures in the transition lobby are from a 1930's renovation of one of the Schock houses in Austin and were removed when that house was remodeled. In Theatre #1 the art deco wall fixtures were rescued from the Colonial Theatre in Marengo, Illinois, prior to its demolition. They were repainted and over half of the glass panels were replaced. In the main auditorium two large statues have been placed over the exitways. These 10-foot neo classic ladies were originally in the organ grills at the MARBRO Theatre, 4110 West Madison, Chicago. They were done in 1927 by Flavin.

Many other elements at the Lake were copied from the originals. The Lake's custom carpet design was copied from a fragment of the original 1936 carpeting found in the building when Classic Cinemas first acquired it. Affinity Art Glass Company copied interior signage from the Lake's original signs.

On April 11, 1936, the Lake Theatre opened with a single screen, and a seating capacity of 1,420. Designed by world-renowned architect Thomas Lamb, the Lake is a prime example of art deco style. When Classic Cinemas took over the Lake in 1981

Visit the victorian home where Nobel Prize-winning author, Ernest Hemingway, was born in 1899

Using state of the art equipment, this self-guided tour will take you through one of the most architecturally renowned areas in America. See the evolution of architecture from the early Victorian period to the Art Deco period of the 1930'

We currently do not have any events for Oak Park, Illinois in our database. If you know of events taking place, please add the event
.

Things to do Historic Theatres near Oak Park, IL