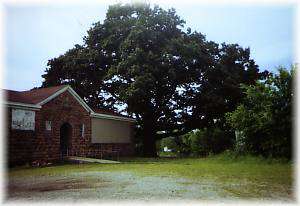 This tree in Tamaha towers over one of the original settlement buildings now used as the senior center. This immense tree is the largest oak tree in Oklahoma.

Come visit us in Tamaha, Oklahoma

We currently do not have any events for Tamaha, Oklahoma in our database. If you know of events taking place, please add the event
.

Things to do Natural Attractions near Tamaha, OK