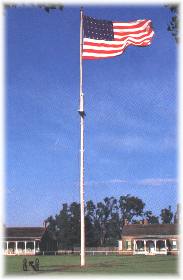 In June 1869, Henry Booth, the principal founder of Pawnee County and the city of Larned, arrived at Fort Larned as the newly licensed post trader. Shortly thereafter, he was appointed postmaster. In January 1872, members of the Fort Larned Town Company met in Booth's Fort Larned home to select a site for their proposed town; and in April 1872, Booth moved the sutler's mess house from the post down the south bank of the Pawnee River and floated it across the swollen stream to a location now occupied by Schnack Lowery Park. The little structure was the first building in the fledgling town of Larned serving as post office, residence, saloon, dance hall, and school. In 1874, the building was moved to 5th and Main Streets to be used as a carpenter's shop. Later, it housed a newspaper office, the U.S. Land Office, and blacksmith shop.

Located midway along the historic Santa Fe Trail, Larned is fast becoming a mecca for tourists and history buffs alike. Drawn by programs and activities at Fort Larned National historic Site, and the excellent displays at the nearby museum, visitors from across the world find lots to see and do in Larned.

Things to do near Larned, KS

The Battle of Coon Creek

Indian attacks along the Santa Fe trail were frequent from the 1820's to the 1870's. Near here, where the trail followed the...

Located along the River Road which follows the south side of the Arkansas River, the American Discovery Trail (ADT) passes cl...