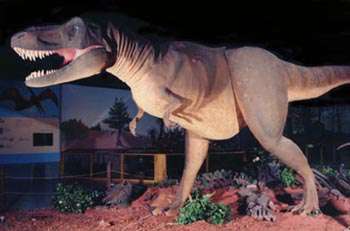 At the Prehistoric Life Gallery, children of all ages are struck with a sense of awe as they step past the 35-foot long Tyrannosaurus Rex that lowers its head and roars at them! A Triceratops, ankylosaur, and a ferocious raptor give a further glimpse into the past. Also represented is the ichthyosaur, a gigantic marine reptile that swam in the waters of Nevada during the time of the dinosaurs.

The African Savanna exhibit presents the breathtaking beauty of the Serengeti, featuring a peaceful watering hole scene on one side and predator-prey relationships on the other. The African Rainforest exhibit features the diverse life found in an African jungle. With the push of a button, visitors can see and learn about the animals hidden in the trees and thick brush, and can experience a thunderstorm with rain and lightning.

The "Out of Africa" exhibit features recreations of three extinct African primates: Australopithecus afarensis, Homo habilis, and Homo erectus. This exhibit is the only one of its kind in the state of Nevada, offering a unique educational experience to better understand prehistoric primates.

Visitors will get a feeling of being underwater in the Marine Life Gallery, painted in cool blue colors to resemble the ocean floor. Live sharks, stingrays, and eels occupy a 3,000-gallon tank while other colorful and fascinating creatures from the deep occupy additional jewel tanks. Life-size recreations of various species of sharks and fish hang from the ceilings and walls.

Marine life, Nevada's wildlife, Africa Savannah/Africa rain forest room and animated dinosaurs are featured, plus children's hands-on room. At the Prehistoric Life Gallery, children of all ages are struck with a sense of awe as they step past the 35

Explore the $4.5 million collection of magic, movie and ventriloquist memorabilia. Experience the history of magic firsthand and see a live comedy magic show in the "Comedy Magic Theatre"

The Liberace Museum displays memorabilia from the world-famous pianist and legend, including a rare piano collection, automobiles, the world'

Over 100 hands-on exhibits in the arts, humanities and sciences plus traveling displays, programs &

To Las Vegas calendar of events

Things to do Museums near Las Vegas, NV

At the Treasures of Mandalay Bay see a King's ransom in rare coins and currency, treasures of gold and silver, and a $2 milli...

See the amazing facts and feats of the Guinness Book of Records brought to life via replicas, videos and hands-on displays....

Exhibits of archeology, anthropology and natural history of the Southwest and Central America plus a traveling exhibit galler...