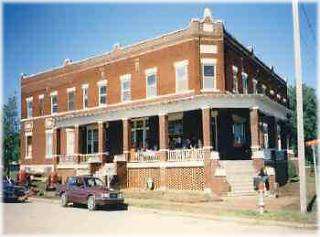 The Leatherock Hotel is the only local hotel left among the 19 hotels built in Cherryvale's bygone era. This 1912 historic hotel, adjacent to the crossing tracks of AT&SF and Frisco railroads and across the road from the site of the old Frisco Depot, provided food and lodging for rail travelers and was vital in housing train crews. The restored AT&SF depot is located just 2-blocks south. A 3-block brick train platform, directly across Depot Street from the hotel, connected the two depots together. The hotel originally contained 32 rooms, a large lounge, a commercial kitchen, and large dining room which was often converted into a ball room, This stately structure is lovingly and thoughtfully being restored to the ambience of its past splendor and railroad history.

As part of the continuing ambitious restoration of the historic hotel, it is serving the community and public as a Bed and Breakfast with experiences beyond overnight accomodations. As you travel down memory lane between 1pm and 4pm daily, you can also review the decorating styles featured in the B&B rooms or suites from the 1912 Bertha Leatherock guest room, the 1920s Louis Brooks Art Deco suite to the 1950s Vivian Vance guest room. The Route 66 Suite is furnished in an eclectic mixture of the eight states that the "Mother Road" traveled and its unusual and peculiar memorabilia.

The main hallways are continually being established as Hall of Fames and Museums with displays of railroad and transportation history.

A history of Cherryvale's transportation, businesses, industries, and the people who made it happen will be displayed in the Cherryvale Hall of Fame and Museum on the east display wall of the Leatherock Hotel's main floor hallway. It will cover the day the Leavenworth, Lawrence and Galveston Railroad platted the city in 1871 up to the year of 1960.

The Mid-Western Railroaders' Hall Of Fame provides a way to honor railroad personnel across the mid- and western part of United States, western Canada, and Mexico. The purpose is to educate and inform the public about the contributions railroader workers and builders have made to the railroad industry through interpretive displays, models, memorabilia and equipment.

A full-size Pullman sleeping and baggage railcar presently is being replicated on the east side of the lower level wing. Railfans, as well as fishermen, hunters, and other travelers, can experience sleeping aboard a turn-of-the-century Pullman railcar which offered the best of accommodations along the Santa Fe system during the glorious days of steam engines and steel rails and elegant travel. The main floor of the hotel and the lower level museum area will be handicap accessible.

Future plans call for an operational model train display portraying the history of railroading in southeast Kansas in the various popular modeling scales or sizes. This museum's operating multi-scale layouts will be housed in the larger west side wing of the lower level basement of the hotel. This multi-scaled layout will be operable from the bay window of a replica train station. Future plans include the reproduction of a Santa Fe Railway Super Chief lounge car interior, a special room to be used for birthday parties and other family occasions with full views of the multi-scale operating train layouts. Special exhibit rooms will display operating circus and military trains with other items of circus and military history and memorabilia.

Built in 1872, this landmark Elk Falls home is still pretty much as it was when the Keefes lived in it. Tours of the house an...