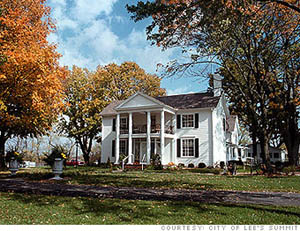 There's a place in the heartland of America where you can experience genuine beauty, a plethora of fun, diverse cuisine, and enriching history. Lee's Summit is known as a family-friendly community that's becoming one of the most prestigious and envied cites in the metropolitan area. This Kansas City suburb recently completed a multi-million-dollar renovation of its downtown, where residents can enjoy summer festivals every weekend, in addition to other events. Lee's Summit is also a big area for health care, with one of the nations largest retirement communities, John Knox Village. Surrounded by three large lakes, acres of parks, festivals, trails, and attractions, fun is always at your fingertips! You may find yourself wanting to spend the day... or a lifetime!

Founded as the "Town of Strother," by William B. Howard for his wife, Maria D. Strother, Howard came to Jackson County in 1842 from Kentucky and by 1850 he and Maria had 833 acres and a homestead five miles north of town. He was arrested for being a Confederate in October 1862, near the beginning of the Civil War, and after being paroled he took his family back to Kentucky for the duration of the war. After the war ended he returned and, knowing that the Missouri Pacific Railroad was surveying a route in the area, platted the town with 70 acres in the fall of 1865 as the town of Strother.

In 1865 the town of Strother changed its name for early settler Dr. Pleasant John Graves Lea, who moved to Jackson County in 1849, from Bradley County, Tennessee. Dr. Lea was killed in August 1862 by Kansas Jayhawkers.

When the surveyors for the Missouri Pacific Railroad came through, the local people and the railroad wanted to name the town in Dr. Lea's honor. He had a farm on the highest point and near the path of the tracks, and his murder had taken place near the site of the proposed depot. So they chose the name of "Lea's Summit," the "summit" portion to reflect its relatively highest elevation on the Missouri Pacific Railroad between St. Louis and Kansas City. But they misspelled the name "Lees Summit" (with two "e's"; "Lee" instead of "Lea"; and leaving out the apostrophe) on a boxcar that was serving as a station and donated by the Missouri Pacific, then a sign next to the tracks, and finally in the printed time schedule for the railroad. Also the name was misspelled on the stone culvert near the station, on the side of the Missouri Pacific depot, but on the other side it was spelled correctly, accordingly the railroad used this spelling, as did travelers.

Others, those with Southern sympathies, claim that the town was named after famed Civil War General Robert E. Lee after Southerners began moving north into Missouri after the war.

Since the name was already being circulated and published with two "e\'s," the town petitioned the state capitol and incorporated its name in 1868 as: "Town of Lee's Summit."

Preserving the history of Lee'

Family fun and recreation that includes an 18

Burial sites of the Younger family: Cole, James, and Robert, famous outlaws who rode with Quantrill'

To Lee's Summit calendar of events

Things to do near Lee's Summit, MO

A recreational sports facility with a strong commitment to the families and youth of our community....