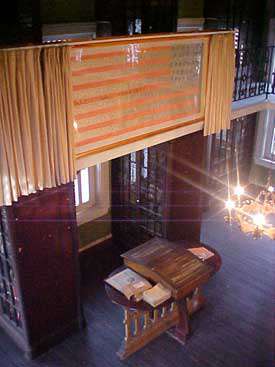 The ground floor of the building was originally used as a lecture hall until the advent of radio and television. It also served as the first site of Lewis College, which opened in 1867 with 140 students. The college later moved to a larger building, but eventually closed its doors in 1891. The second floor of the library is essentially the same as it was at the time of Lewis College's closing, with several display cases and museum artifacts. Through the years, the lower floor has been used to roll bandages for World War II, hosted parties, receptions, plays and elections as Glasgow's Community Center, and celebrated the Glasgow High School Graduations on the main stage.


Come visit us in Glasgow, Missouri

The building housing the Glasgow Museum is listed on the National Register of Historic Places and was given to the city in 1976. The Gothic Revival building, originally a Baptist church, was constructed in 1861

Stump Island Park is located on the site of the June 10-11, 1804, camp named "Stump Island" in Lewis and Clark's journal. An interpretive sign is posted there.

We currently do not have any events for Glasgow, Missouri in our database. If you know of events taking place, please add the event
.

Things to do Historic Buildings near Glasgow, MO

Nestled between the bluffs along the Osage River, this early French settlement now offers restaurants, shops, a wedding chape...

Dulany Auditorium was built in 1907. It is home to plays and musicals produced by the WWU theater department, as well as conc...