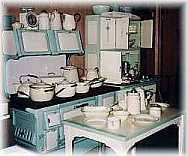 The front of the main floor houses a large flea market, and museum displays are in the rear and basement. There's a large collection of cap guns associated with western stars such as Roy Rogers and Gene Autry, and there is an assortment of antique and period clothing. Hundreds of Cabbage Patch dolls fill one room.

Museums displays are arranged by decades from the late 1800s to 1970. Mannequins wearing clothing depict each era. The museum houses furniture, cookstoves, toys and dolls. There also are working Lionel and American Flyer train sets from the 1940s, 1950s, and 1960s, and a collection of 50 clocks.

Kitchen and other rooms from the 1900s to the 1950s are on display. Each period had its own type of enamelware. Red and white were popular in the 1940s, while green and tan were popular for kitchen utensils in the 1930s. Gray and spatter stoves and enamelware were found in the early 1900s. Amongst the glassware is 5,000 pieces of depression glass, a beer sign collection, and McCoy pottery.

The basement level contains old farm tools, memorabilia from the late 1800s and early 1900s and a mannequin ready for a ride in a buggy that was refinished by the Amish, and a wagon brought back from Wisconsin.


Tours for groups of at least 10 people may be arranged. Tours can be arranged to include a tour of Harlan County Dam and a dinner theater production.

To Republican City calendar of events

Things to do Museums near Republican City, NE