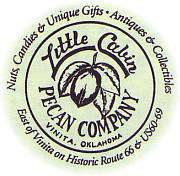 The picturesque setting along the highway is widely known as a showplace orchard. The shop is actually located between the old 1926 original Route 66 and todays present highway. We still have an old concrete bridge of the original highway dated 1926.

The shop is increasingly becoming a popular tourist spot as it has been written up in state, national and international publications. Customers find a wide variety of quality unique gifts, many locally made, and not found in mass marketing stores.

Things to do Venues near Vinita, OK