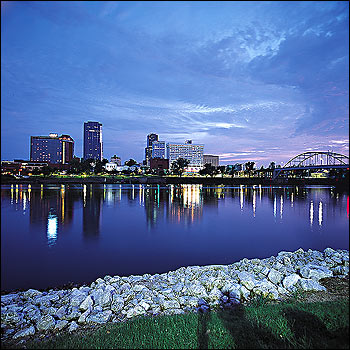 Arkansas's capital city, Little Rock began on the Arkansas River and years later it's still the place to be with the bustling River Market District featuring restaurants, shops, bars, museums and hotels. A great new addition to the area is hte Clinton Presidential Center & Park, which has been welcoming crowds of visitors since opening in November of 2004.

The arts flourish here with the Arkansas Arts Center, housing one of the most-acclaimed collections of works on paper in the country. Fine and casual dining are abundant, as are performing arts opportunities. Numerous museums covering everything from science and Arkansas history to the role of the military in the state and Black history are also found here. A good way to get an overview of Little Rock and its major attractions is onboard a Little Rock Tours state-of-the-art bus. The tours, which depart daily from the River Market District, feature knowledgeable guides and relevant Hollywood and news clips shown on screens throughout the bus.

Outdoor lovers won't be disappointed either with numerous city parks offering running/walking trails, fishing, ball fields and picnic areas. Just to the west of town is Pinnacle Mountain State Park, a day-use park which offers a birds-eye view of the city from its summit.

Historic neighborhoods in the downtown area -- MacArthur Park and Governor'

Located in a renovated Mobil Service Station across from Central High School National Historic Site, the permanent exhibit, "All the World is Watching Us: Little Rock and the 1957 Crisis" details the events of the 1957

To Little Rock calendar of events

Things to do near Little Rock, AR

The site of a major test in 1957 of the Civil Rights act where nine (the Little Rock Nine) African-American students integrat...

Directions: Ark. 161 at Bayou Meto Creek The Batttle of Reed's Bridge was fought during the 1863 Little Rock Campaign as U...