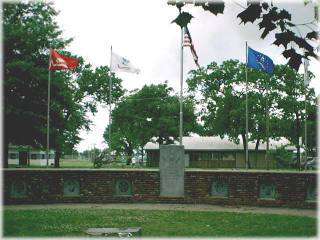 This memorial park has served Cherryvale since 1881 when the Leavenworth, Lawrence & Galveston Railroad offered the six-acre tract to the city. In 1895, Civil War Veterans held their first "Old Soldiers' Southern Kansas Reunion right here in Logan Park, Cherryvale, Kansas. This "Reunion Association" leased the park for a two-week period for each year for 99 years. The "Association" named it Logan Park in honor of General John A. Logan, the first commander-in-chief of the Grand Army of the Republic from 1868 to 1871.

The annual reunions were the delight of the young and old alike and was the highlight of the year. The soldiers arrived by horse and buggy and by special trains. Free cots were furnished in the Women's Relief Corps building; these women prepared and served dinners for 25 cents each.

The "Auditorium" in Logan Park was the center of activities in those days. The famous Teddy Roosevelt was the first speaker among many distinguished soldiers and statesmen to speak from the platform of the "Auditorium." In 1913, a special guest speaker was U.S. Senator Charles Curtis, who became Vice-President in 1928 when Herbert Hoover was our United States President.

By the late 1920s the number of the "Old Soldiers" had decreased and by 1939, most all of them had joined the "Great Association Up There."

On May 20, 1989, a Veterans Memorial was dedicated in memory of those who served our country. It was erected through the labor of volunteers and monetary donations from area residents and former Cherryvale residents. The Memorial honors all branches of services including veterans who were MIAs or POWs. Cherryvale bricks are incorporated in the design of the walls where service emblems are embedded into the monuments with service flags proudly flying 24 hours a day.

Logan Park is still the center of community activities. It is the location of the municipal swimming pool, tennis court, high school football field, plus playground equipment and picnic facilities.

Things to do Memorials near Cherryvale, KS