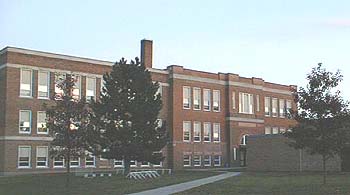 The first settlers of Lyons came in the summer of 1866. The fertile soil of the Logan Valley, combined with the commercial promise provided by access to the railroad after 1881, assured the life of the town. Incorporated in 1884, the village was named for Waldo Lyon, a prominent citizen upon whose land the plots were laid out. Residents have continued to abide by a provision in Lyon's deed, stipulating that liquor not be sold within the town at risk of forfeit of the property.

The Lyons Roller Mill was erected in 1869. The three-story structure was powered by water from a dam built across Logan Creek just west of the town, and was in operation until 1931.

Many of the buildings of the town are constructed of brick manufactured in a brick yard which began operation in 1878. The swimming pool sits in the depression from which the clay was taken.

One of the finest trotting tracks in the country opened in 1891, just one-fourth mile west of Lyons, named The Kite Track. Famous horses broke world records and won large purses on this kite-shaped race track before hard times ended racing after 1893.

St. John's German Evangelical Lutheran Church is an excellent example of a German folk version of the Gothic Revival style. Unique in its rich wood and metal detailing, St. John's is one of the finest and least altered frame churches in Nebraska.

Located on the west end of Lyons, the park has full hookups for campers with showers and toilets; a swimming pool; picnic and shelter areas; facilities for horseshoes; lighted sand volleyball, tennis and basketball courts; playground equipment;

We currently do not have any events for Lyons, Nebraska in our database. If you know of events taking place, please add the event
.

Things to do near Lyons, NE