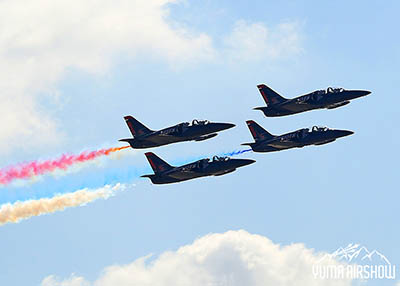 Marine Corps Air Station Yuma is opening its gates to the public to deliver a free, world-class airshow in Yuma. The event will encompass civilian air acts, modern aircraft displays, live air performances, and much more.

MCAS Yuma extends our sincere thanks to the citizens of Yuma and its visitors for the unfailing support of the Air Station year round. Please come out and learn the vital mission of the Marine Corps and Marine Corps Air Station Yuma. Gates open at 9 a.m. with performances starting at 10 a.m.

Imperial National Wildlife Refuge protects wildlife habitat along 30 miles of the lower Colorado River in Arizona and California, including the last unchannelized section before the river enters Mexico. The river and its associated backwater lakes and wetlands covering 15,000

A narrated jet boat tour is a great way to learn about the history of the Colorado River, as well as sight a variety of birds and wildlife, and view historical Indian Petroglyphs.

To Yuma calendar of events

Things to do near Yuma, AZ