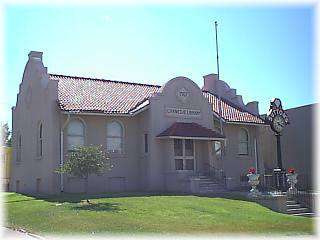 The McCook Library, listed on the National Historic Register, is an example of the Spanish Colonial Revival style, designed by architect William A. Marean of Denver, Colorado. Marean designed numerous turn-of-the-century buildings of prominence in Denver and the surrounding area, but the library building in McCook is the only structure in Nebraska known to have been designed by him. Property for a building site was donated by a local firm, and Andrew Carnegie provided construction funds in December of 1905. The library was dedicated on February 17, 1908.


Come visit us in McCook, Nebraska

Authentic pioneer artifacts from the 1870

Built in 1886, the Senator George W. Norris Home is both a state and national historic site focused on the history and vision of Senator George Norris (1861-1944). The Home is listed on the National Historic Register.

A landmark of its own, downtown McCook is lined with striking architectural designs. Each building is rich in its own history, providing an enjoyable atmosphere reminiscent of the times in which McCook experienced its booming growth.

The McCook Library, listed on the National Historic Register

To McCook calendar of events

Things to do Carnegie Libraries near McCook, NE