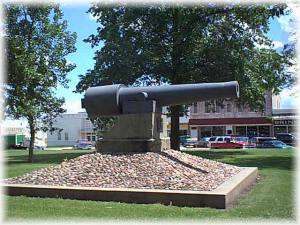 The cannon is a replica because the actual cannon that was originally placed as the memorial was called up in World War II to be used as scrap metal - yet another sacrifice in the efforts for our country's freedom. The plaque placed on the memorial remains originally cast from the metal of the USS Maine.

A local blacksmith made this replica statue in respect for the continuation of the memorial.

Things to do Memorials near Tecumseh, NE