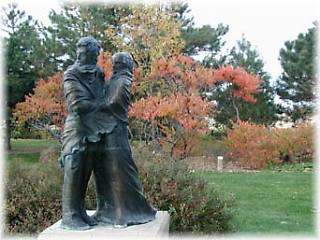 Midwest Park Arboretum in the northeast part of
Stromsburg has more than 75 different varieties of
trees and plants, with more added each year.
Stromsburg has been designated as a Tree City
USA for 20 years. As the site for the annual Arbor
Day celebration., it has an historical gazebo,
playground facilities, and picnic tables.


As a special millennium project, a plaque was
added to the bronze sculpture identifing it as
"Swedish Pioneers." The sculpture was cast for the
city in 1976 by Stromsburg native Dana Westring.

Things to do Arts near Stromsburg, NE