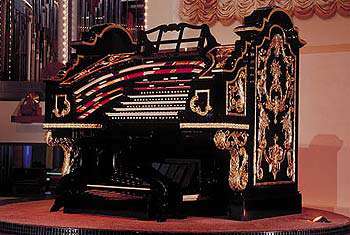 The Mighty Wurlitzer organ, built in 1927, boasts more than 5,500 pipes, making it one of the finest and the largest Wurlitzer theater organ in the world. Its pipes, numerous percussions, and countless traps are masterfully presented by The Musical Staff who are world class musicians. All are part of the Organ Stop Pizza featuring pizza, spaghetti, lasagna, and subs.

The building's design is expressly for the enjoyment of patrons, with the organ installed in four chambers at one end of the restaurant. Forty-three foot ceilings provide unparalleled acoustics. The console is "presented" on an 8000 pound rotating hydraulic elevator. Many of the percussions (such as the xylophones, glockenspiels, drums, etc.) are installed in the dining room for greater audience appeal. The massive quantities of wind required for operation are provided by four huge turbine blowers (visible from the outside of the building in the blower complex).

Organ Stop's Wurlitzer theatre organ was built for the Denver Theatre and was installed in 1927. The organ was used regularly until the early 1930's. With the advent of the talking picture and the 1930's depression, the organ was rarely heard. It was silenced when a fire in the auditorium caused extensive damage to the organ's relay.

In the theatre, the organ was a style 260, having a three-manual console and 15 ranks/sets of pipes. Organ Stop purchased the instrument in the early 1970's and undertook the mammoth task of rebuilding the instrument. Several additions were made to the instrument by acquiring parts from other ill-fated Wurlitzers. The resulting 23 rank organ was installed in our original facility in 1975.

The enlargement and improvement of this instrument has been an ongoing project... In 1997, a larger four manual console was added to the instrument. The new console is an exact replica of a "Fox Special" French case, ornamented to match the famous Brooklyn Paramount Wurlitzer. This is the largest console type ever designed and built by Wurlitzer. Through the years, several rare sets of pipes have been added to the organ, including a massive set of 32' wood diaphones (visible from the front of the building). As of 1999, the organ boasts over 5500 pipes.


Come visit us in Mesa, Arizona

The thirst for the thrill of America's pastime can even be quenched during the off-season! For over 50 years, Mesa has been home to the Chicago Cubs during the month of March for Spring Training.

Things to do One Of A Kinds near Mesa, AZ