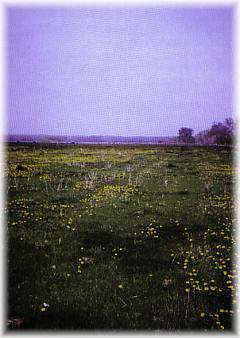 The Mormon Trail through Nebraska was not a narrow pathway in the same sense as a road. It was a corridor which might be a few dozen yards wide to several miles in width depending on the terrain. The oxen dictated the pioneers' traveling speed and could only make about two miles an hour slower that a man could walk.

In 1856, Brigham Young conceived the idea of organizing companies of handcarts to make the journey of 1300 miles on foot to Salt Lake City. Handcarts would be faster, easier and a cheaper way to bring converts to Utah. The handcarts were modeled after carts used by street sweepers and were made of Iowa hickory or oak. They were generally 6 or 7 feet long and could be pushed or pulled. These handcarts were usually shared by four persons, or a man and his wife with their children, pulling their cart with provisions for two or three days. Every 10 carts were accompanied by a wagon and two yoke of oxen and carried tents for sleeping and extra baggage to Salt Lake.

The Mormons made their way to the bank of the Platte River in Nebraska which would be their guide for the next 600 miles through Nebraska and into Wyoming. They arrived at a fork in the road which led them to the village where the old Pawnee nation was located. This village was 100 miles from Winter Quarters that were established at Florence, north of Omaha. The pioneers camped for the night at the mouth of the Looking Glass Creek on the bank of the Loup Fork of the Platte.

Later the company forded Beaver Creek and then reached the deserted Pawnee missionary station near Plum Creek. The missionary station was deserted after the Sioux burned the Pawnee Village. They reached the fording place on the banks of the Loup and after unloading and carrying the goods while the wagons were pulled across by guiding ropes, they traveled past the place where the town of Genoa would be founded in the spring of 1857.

Information of the location of the visible Mormon Trail ruts can be acquired at the Genoa Historical Museum as well as viewing one of the Mormon hand carts.

Things to do Historic Trails near Genoa, NE