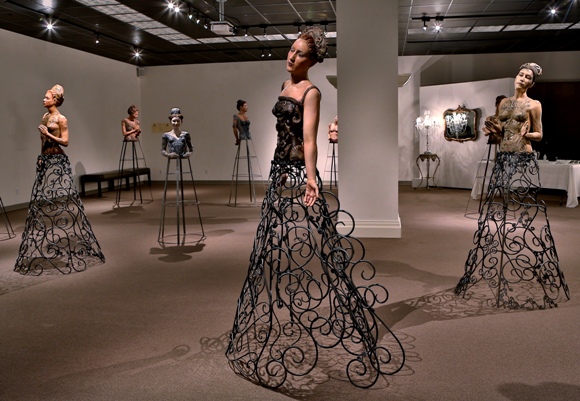 The Fort Hays State University Art Department and Moss-Thorns Gallery is located on the first floor of Rarick Hall on the northeast edge of the FHSU campus. Rarick Hall was completed in the spring of 1981 and the gallery space was first called the Visual Arts Center Gallery. During the university homecoming events on October 11, 1987, the gallery was rededicated the Moss-Thorns Gallery of Art. The gallery was named for Joel C. Moss (who was Chair of the Department of Art from 1946 to 1973) and John C. Thorns, Jr. (who was Chair from 1973 to 1990).
Student and faculty exhibits, as well as traveling exhibits, are presented on a regular basis. The gallery changes shows throughout the year. They include: faculty exhibitions, MFA thesis exhibitions, traveling exhibits, student exhibits, print collections and various other student works. The gallery also participates in the annual gallery walks with opening receptions for new art exhibits during the spring, summer, fall and winter gallery walks.

Throughout the university campus are numerous displays of art including nearly a dozen sculptures. A self guided walking tour provides visitors the opportunity to enjoy the beautiful campus and see the many unique displays. Upon leaving the Moss-Thorns Gallery of Art a sculpture to look for on the south side of Rarick Hall near the main entrance is "Interlude." This piece was sculpted by FHSU artist Gary Coulter and was dedicated May 5, 1994. The work is meant to portray the strength found in all women. A grant from the Jean Stouffer Fund at FHSU paid for the molding and casting costs of the 357-pound bronze sculpture.

Located in front of Martin Allen Hall, is a sculpture called "Deeply Rooted." This provocative work was created by FHSU artist Linda Ganstrom and was dedicated October 2, 1999. The work was influenced by the writings of George A. Kelly, a professor of Psychology at FHSU from 1931-1943. Across the street to the south of Sheridan Hall is a sculpture of native limestone by local artist Pete Felten. It was dedicated in 1997 and is called “Contemplation Garden” and features a teacher and student.

Located on the second floor of the FHSU Memorial Union is the locally famous painting by artist Bruce Burkholder titled - “History Holds the Future.” Burkholder began working on this 4’ by 8’ oil-alkyd linen mural painting in 1986 and continued to work on it off an on for the next 23 years. It was completed on October 2, 2009, and in June 2010 it was added to the other framed pieces of art displayed in the Memorial Union.

Admission: Free Admission
Hours: 8 am to 4:30 pm. Closed on Friday during the summer.

The 1895 Kansas legislature declared, "The experience of the settlers of the settlers upon the plains of western Kansas has demonstrated conclusively that agriculture cannot be pursued with profit under existing natural conditions."

The Works of Gerald Moore

By day, Gerald Moore is a typical farmer. He has a diversified farming operation on nearly 700 acres in north central Kansas ...