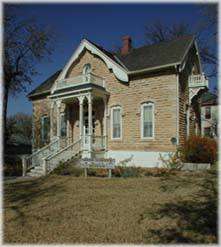 Built in 1881, the Mueller-Schmidt House is the oldest Dodge City house still standing on its original site, and remains Ford County's "Home of Stone," A Cattleman's Mansion.

Listed on the National Register of Historic Places, it was built with 21-inch limestone walls by John Mueller, the first bootmaker in old Dodge City. It was later purchased in 1890 by pioneer blacksmith, Adam Schmidt. Two of Adam and Elizabeth Schmidt's children lived in the house until 1960. Ford County purchased the house in 1965.

There is a special collection on Pioneer Mothers. Original furniture from the Mueller and Schmidt families is featured, along with artifacts from the pioneers of Dodge City, including Robert M. Wright, Charles Rath, Bat Masterson, George M. Hoover, Wyatt Earp & Ham Bell.

Come walk back into history, standing where the pioneers of the Old West and Dodge City lived.

The home is open for viewing beginning in June through August. The home is closed the remainder of the year except by appointment.