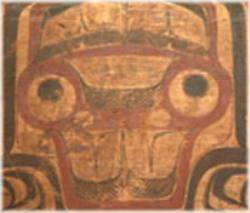 The Museum of Anthropology focuses on people from around the world, how they make their living, how they communicate and get along with one another and what they believe. The museum's extensive collections, which have accumulated since the turn of the century, now include nearly two million items. The museum is recognized for ethnic and folk art creations from the Americas and Africa, as well as prehistoric archaelological artifacts from the Midwestern United States.

Annual exhibit offerings include the nationally recognized Lawrence Indian Arts Show juried competition in September and October; and "Los Dias de los Muertos," the Mexican Days of the Dead festival in November. In addition, a variety of short-term exhibits are presented each year.

Located on the first floor, adjacent to the exhibit galleries in Spooner Hall, the Museum Gift Shop displays a variety of traditional and contemporary art and craft items reflective of the Museum's multi-cultural orientation and collections.

Today, the anthropology collections remain in Spooner for use by scholars and students. The ethnographic collections have joined the Spencer Museum of Art. The Archaeological Research Center and its collections are a unit within the Biodiversity Institute.