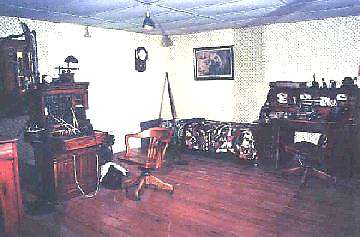 The Museum of Independent Telephony shares a building with the Dickinson County Historical Society and Museum. It was in Abilene that Cleyson L. Brown, a local youth, built and operated a telephone exchange in 1898, later expanding into other communities. He called his system the United Telephone Company.

Although the original telephone properties eventually were sold, United continued to maintain executive offices in Abilene until 1966 when the headquarters were moved to Shawnee Mission, Kansas.

Brown pioneered many other businesses in Abilene. At one time the Brown enterprises employed about 25% of the wage earners of Abilene, including David Eisenhower and his son, Milton, the father and brother of the 34th President of the United States.

The late Carl A. "Skip" Scupin, former president of United, helped to establish the Dickinson County Historical Society and Museum.

Today, nearly a century after the first United exchange was established, the United Telephone companies form the local division of Sprint Corporation, an international leader in the telecommunications industry.

Only a part of the museum's total collection is on display at any given time. By changing and replacing its exhibits frequently, the museum is of continual interest, even to repeat visitors. Some exhibits, however, are so popular that they are retained on permanent display.

The "old business office," for example, is a re-creation of a typical telephone exchange in the era of the crank telephones and magneto switchboards. The manager's rolltop desk is authentic, as is the iron cot where the switchboard operator napped between calls at night.

Hobbyists who specialize in glass and ceramic insulators appreciate the rarity of the specimens exhibited prominently in the museum's specially built display cases.

The dial telephone was one of many improvements first introduced by Independent telephone companies. One exhibit traces the evolution of the telephone dial.


Come visit us in Abilene, Kansas

Abilene, Kansas, also known as the Greyhound Capital of the nation, hosts the Greyhound Hall of Fame which offers the entire family a thorough and exciting introduction to the Greyhound, the sport, and its long and colorful history. The history of Greyhounds from 5,000

10,000-square-foot factory outlet store, has a video that plays all the time, to show you how the candy is made.

Things to do Museums near Abilene, KS