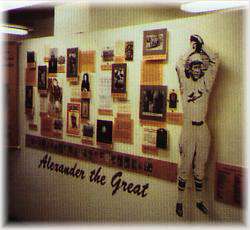 St. Paul's Baseball Museum is devoted to illustrating the careers of 114 Major League Baseball players with Nebraska roots. All 114 players have made it to the Major Leagues of American Baseball. Five have been inducted into the National Baseball Hall of Fame: Grover Cleveland Alexander - 1938, Dazzy Vance, "Wahoo Sam" Crawford, Bob Gibson, and Richie Ashburn. All of these except Ashburn are listed in the "Top 100 Baseball Players of the 20th Century."

Howard County native Grover Cleveland Alexander leads the way. Alexander was born near Elba, Nebraska and spent his later years in St. Paul. "Alex" is the third "winningest" pitcher in baseball history. In 1911, his first season, he amassed 28 victories. He compiled over 373 total victories, 90 shutouts, and holds records which are yet unbroken. Elected to the Hall of Fame in 1938, Alexander retired to St. Paul and is buried in Elmwood Cemetery.

Major displays on the five Hall of Fame players illustrate their baseball careers including: trading cards, pictures and artifacts. Additional displays are being developed for the "Nebraska's Top 25 Roster," including Les Nunamaker of Malcom 1911-1922, who played catcher for Alexander at many area county fairs; Johnny Hopp of Hastings, elderly, but still living; Rex Barney-Omaha; Billy Southworth-Harvard; Adoph Liska-Dwight; Tim Burke-Omaha, a great relief pitcher, played for Montreal & Yankees; and "Mr. Baseball," Clarence Mitchell of Aurora are currently on display as a loan from the Nebraska State Historical Society.

Additional research is being conducted in order to feature teams in the Nebraska State League of the early 1900s. Many communities throughout Nebraska once hosted major league Farm teams which played throughout Nebraska in Ord, Holdrege, McCook, Grand Island, Hastings, Kearney, and Lincoln.