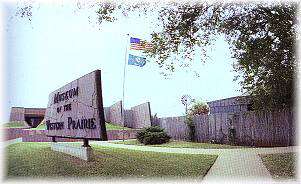 The Museum of the Western Prairie examines the development of Southwest Oklahoma, the geographic area bounded by the North Fork of the Red River, the 100th Meridian and the Red River. The area, organized in 1873 as Greer County, Texas, forms the present Oklahoma Counties of Greer, Jackson, Harmon and a portion of Beckham.

A modern adaptation of the pioneer half dugout, the Museum of the Western Prairie recalls the determination and hardship of early settlers. The museum houses two main galleries; displays range from volcanic uplifts and ancient inland seas through modern agri-business and industry.

Exhibits depict the lives of Native Americans, frontier soldiers, cowboys, homesteaders and farmers, merchants, lawmen, and women. Topics include the prairie, the frontier, the Great Western Cattle Trail, the coming of barbed wire and plows, the quest for land and water, farm mechanization, railroads, the Depression and the Dust Bowl, and war.

The Museum of the Western Prairie houses the Bernice Ford-Price Memorial Reference Library (available by appointment). Holdings include family histories and material related to Altus and surrounding communities. The museum also maintains an extensive collection of photographs.

The Museum of the Western Prairie gift shops stocks a variety of books for children and adults. jewelry, toys, postcards and souvenirs.

Admission: Admission is $4 for adults, $3 for seniors and military personnel, and $1 for children 6 to 18.
Hours: Tuesday though Saturday from 9AM to 5PM. No entry after 4:30.
Closed Sunday and Monday, state holidays
Address: 1100 Memorial Drive
Phone: 580-482-1044
Fax: 580-482-0128
Our Email: muswestpr@okhistory.org
By appointment, the staff and volunteers of the Museum of the Western Prairie offer a variety of programs for school and other groups.

Things to do Museums near Altus, OK