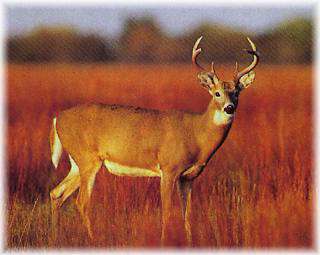 Today, the region remains sparsely populated except for an occasional sprawling ranch. With its unspoiled landscape, the Sandhills are a wondrous place to view wildlife. Lakes and wetlands erupt with pelicans, herons and other water birds; antelope, deer, and elk roam the grasslands.

The courting rituals of sharp-tailed grouses and prairie chickens in spring will fascinate you. Large, orange-red sacs on the males' necks swell up during the courtship dance, in which the birds boom, coo, cackle, jump, pounce, and stomp.

Samuel R. McKelvie National Forest - Despite its name, the 116,000 acres is mostly native prairie in the midst of Nebraska's vast Sandhills near Valentine. Approximately 5,000 acres have been successfully planted to eastern red cedar, ponderosa, jack and Scotch pines. The remainder of the reserve is managed for wildlife and for livestock grazing. By presidential proclamation in 1902, conservation-minded Theodore Roosevelt set aside two blocks of Nebraska land as national forest reserves. The Bessey Division headquartered at Halsey, and Niobrara Forest Reserve.

Recreation activities include fishing, camping, hiking and hunting in season. A short distance from the ranger station, the 23-unit Steer Creek Campground was completed in 1972. For those who seek serenity in solitude, they may find it beneath its whispering pines.

Fort Niobrara National Wildlife Refuge - In 1890, Fort Niobrara was established to provide military protection to the settlers in the region. Although there was no Indian trouble in the immediate area, the post remained active until 1906. In 1912, a portion of the original Fort Niobrara was set aside as a national game preserve. Its impressive visitors' center features excellent wildlife and natural history displays and historical artifacts from the old fort. Nearby, sizable herds of buffalo, elk, and Texas longhorn cattle can be observed on a self-guided auto tour. A beautiful pine-dotted canyon, including many waterfalls, is the favorite "putting in" spot for canoeists on the river. Fort Falls is the second-highest waterfall in the state.

Then set out on the refuge trails for the Fort Niobrara Wilderness Area. Bald eagles make these canyons their homes in the winter, and migrating ducks and geese often stop here. Other wildlife might include white-tailed and mule deer, turkeys, burrowing owls, prairie dogs, sharp-tailed grouse, prairie chickens, and golden eagles.

Valentine National Wildlife Refuge - A whopping 270 species of birds, including trumpeter swans, pelicans, herons, and wild turkeys, flock to this collection of shallow lakes, meadows and marshes in the rolling prairies of the Sandhills. View prairie chickens and grouse from observation blinds. Other wildlife include white-tailed and mule deer, muskrats and beavers.

Have your camera ready because there will be ample opportunity to get shots of a variety of waterfowl. Lakes located on refuge property offer the angler the challenge of a lifetime. Picnicking facilities are provided as well. Big Alkali Lake is home of the big northern. Alkali Fish Camp has cabins, free camping, and boat rentals.

Things to do Wildlife Refuges near Valentine, NE