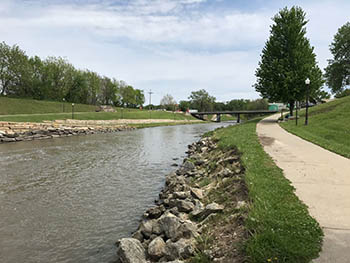 "Retracing the Footsteps of the Pioneers". The Neosho Riverwalk connects the Madonna of the Trail statue, Guardian of the Grove statue, the Neosho River Crossing and the Kaw Mission Historic Site. This ADA accessible walk curves gracefully down the river bank to the crossing of the Old Santa Fe Road. A splendid low-water, walking bridge spans the river and continues on up among thousand of wild flowers, plants, and native grasses to the Kaw Mission Historic Site. At night, lights from the Riverwalk reflect in the water, causing us to reflect on nature and history along the Neosho River.

Things to do Trails near Council Grove, KS