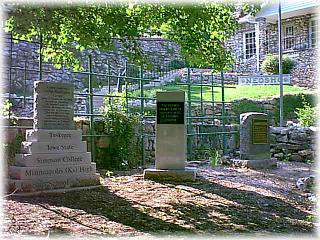 The Walk of Fame is a project to honor citizens of Newton County who have made
significant contributions to society and achieved widespread recognition for
their work. Of the four men, three (Thomas Hart Benton, George Washington
Carver, and James Scott) were born in Newton County. Benton and Scott
were born in Neosho, and Carver on a farm near Diamond. Herman Jaeger,
a native of Switzerland, immigrated to America and settled on a farm east of
Neosho in 1865. It was here that he did his important work.

Drawing was an early passion with young Benton. He resisted his father's efforts
to make him a lawyer and began drawing professionally in 1906 as a cartoonist
for the Joplin American Newspaper.

Having decided to become a serious artist, he attended the Chicago Art Institute
in 1906 and 1907. He then went to Europe, attending the Academie Julien in Paris
and studying the work of the Old Masters in Italy. He returned to America inn
1912, working in New York, trying to find a personal painting style. In World
War I, he worked as a draftsman in the Navy. After the war, he stayed in New
York and became known as a muralist. He married Rita Piacenza in 1922, and they
eventually had two children, Thomas (T.P.) and Jessie. In 1924, Benton returned
to Missouri to be with this father who was dying of cancer. He then spent 10
years traveling and studying America and its people.

In 1935, he returned to Missouri and was commissioned to paint a mural in the
House Lounge of the Missouri State Capitol, possibly his greatest work. In addition
to the capitol mural, Benton did work for Harzfeld's Department Store in Kansas
City, created a mural in the Truman Library, and painted Joplin's Centennial
Mural. He continued painting until January 19, 1975, when he died in his studio
after completing a mural for the Country Music Hall of Fame in Nashville.

He began his formal education at age 10 when he entered the black school in
Neosho, staying with Andrew and Mariah Watkins. He later attended school in
Kansas and college at Simpson College, Winterset, Iowa. He received a Masters
degree from Iowa State College in 1896, and accepted an invitation from Booker
T. Washington to come to Tuskegee Institute as an instructor. At Tuskegee Carver
did his best known work in practical science, helping to improve farming conditions
in the American South.

Nearly every school child knows that Carver discovered more than 300 uses for
the peanut and about 100 for the sweet potato. As director of the agricultural
experiment station at Tuskegee, Carver took to the road with a wagon to disseminate
agricultural knowledge in the South. He ignored lucrative offers from industrialists
and remained at Tuskegee until his death in 1943. He never patented any of his
discoveries because he did not want them to benefit specific genius.

Carver possessed great talent in painting and music. Industrialist, Henry Ford,
said of Carver, "He had the mind of a scientist and the heart of a saint."
When the George Washington Carver National Monument was authorized, it was the
first national monument to honor an individual other than a President of the
United States.

James Scott
- James S. Scott, ragtime composer, was born in Neosho in 1886, and had his
first musical composition published in 1903, when he was only 17 years old.
That work, "A Summer Breeze - March and Two Step" - was published
by the Carthage music publishing firm of Dumars.

When Scott was a child, his family moved from Neosho to Kansas, but sometime
prior to 1903, returned to Missouri, settling at Carthage. Dumars published
about two of Scott's rags each year until his compositions were taken on by
Stark and Son, a large publishing house in St. Louis, Missouri, which also published
the works of the better-known composer, Scott Joplin.

James Scott was a prolific composer and is considered by most critics to be
second only to Scott Joplin as an important composer of ragtime music. James
Scott continued to compose ragtime until 1922, when the new Jazz Movement began
to overpower and replace Ragtime music.

Scott spent his later years in Kansas City where he was a popular and well-known
entertainer. He gave music lessons, played piano in silent movie houses and
led his own orchestra which played in night clubs in and around Kansas City.
James Scott died in 1938 at the age of 52 and is buried in Westlawn Cemetery,
Kansas City, Kansas.

Herman Jaeger
- Herman Jaeger, a Swiss immigrant who came to Newton County in 1865,
and established a vineyard east of Neosho, is more widely known in France than
in Missouri. He was one of several Americans who came to the aid of the French
wine industry when it was threatened by the grape phylloxera, or root louse.

Jaeger, in addition to his first grape planting, roamed the woods of the area
and the banks of Shoal Creek, in his search for superior wild grapes. One of
his selections he named the "Neosho" grape, and it was highly regarded
by his peers as a wine grape. Jaeger also noticed that American grapes, having
evolved with the, also American, phylloxera, were found to be resistant to the
pest. At his suggestion, Jaeger and others began shipping American grape root
stocks and cuttings to France so the European grapes could be grafted on resistant
root stocks.

In recognition of his efforts, the French government awarded Jaeger the Legion
of Merit in 1889. Although less well known, Herman's brother, John Jaeger, has
a farm next to Herman's, and helped in this project.

A considerable mystery surrounds the death of Herman Jaeger. One day, in 1894,
he told his family he was going to Joplin on business and would be gone all
day. He was never seen by his family again. His wife received a letter mailed
in Kansas City, in which he indicated he was going to commit suicide, but no
trace of Jaeger was ever found and authorities have cast doubt on the authenticity
of the letter.

Things to do Monuments near Neosho, MO