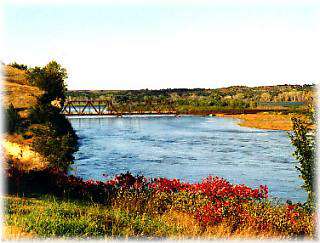 The old railroad bridge northwest of Niobrara
provides a walking bridge from Niobrara to the
Niobrara State Park. It was built in 1929 as a replacement for a 1902 bridge across the river. It spans the Niobrara River
just before it empties into the Missouri. A wood
deck complete with rails and benches has been
constructed over the entire length of the railroad
bridge providing excellent opportunities for
fishing, birdwatching, and nature enthusiasts. The
bridge is registered in the National Register of
Historic Places.

Things to do National Register near Niobrara, NE