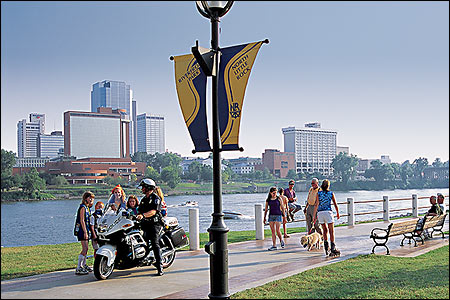 North Little Rock is centrally located with I-30, I-40, I-440 and U.S. 67/167 all converging into the city. Located on the north shore of the Arkansas River North Little Rock is a shopping mecca with the state's largest mall -- McCain Mall -- along with numerous smaller shopping centers that encircle the McCain Boulevard exit off the interstate. In the planning stages is The Shoppes at North Hills complex which will be anchored by a Bass Pro Shop. In addition numerous antique malls are scattered throughout town. A "don't miss" attraction is the Old Mill, an authentic reproduction of an old water-powered grist mill which appears in the opening scene of the classic movie, "Gone with the Wind." Alltel Arena hosts college and NBA basketball games plus concerts by major entertainers. The city parks system is one of the best with Burns Park and North Shore Riverwalk two of the most popular. Burns Park is huge, covering more than 1,500 acres. It has facilities for numerous sports while the Riverwalk is a lighted walkway and jogging/fitness trail running parallel to the Arkansas River. In the summer Wild River Country is the place to beat the heat.

Located on the north side of the Arkansas River, this park offers picturesque views, lighted walkways and a jogging/fitness trail. New North River Landing off I-30

Directions: Take Exit 150 Off I-40 And Follow Signs To Camp Robinson. Located Off 6Th And Missouri (Bldg #6400) Devoted to the history of the Arkansas National Guard and that of Camp Robinson

Things to do near North Little Rock, AR

Directions: Located on the grounds of Joe Hogan Fish Hatchery Displays including aquariums and mounted species native to t...

Dr. Samuel M. Strong is a general practitioner in Little Rock, Arkansas and focuses his private practice on cosmetic and impl...